African Collectables was originally founded in July of 1969 by Jason Cambitzis and first called Space Age Products as seemed fitting in the year of the first manned moon landing. Jason was born in Zimbabwe and qualified as a master gunsmith. Led by a deep love of the African bush and wildlife, he designed and built the first practical wildlife capture tranquiliser dart and was actively involved with Rupert Fothergill in Operation Noah, rescuing wildlife from the rising waters of the Zambezi River as the newly built Lake Kariba filled.

The first products made by the company were exclusive objets d’art along an African theme, a tradition continued today by the next generation owners of African Collectables, brothers Nick and Creon Nicolaidis, who took over the business from their uncle in 1985. The brothers are multi-talented craftsmen with university degrees in chemistry, gemmology and metallurgy as well as expert goldsmiths and silversmiths. This knowledge has contributed greatly to the expansion and diversification of an exciting product range. 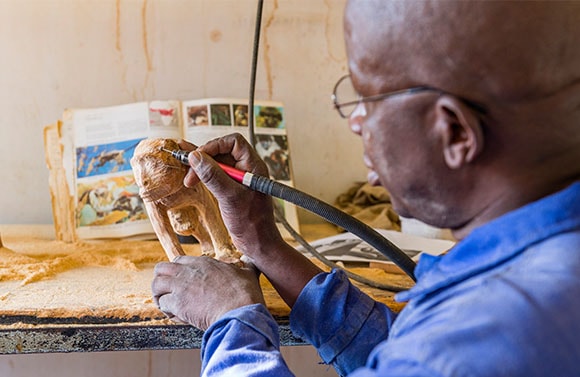 Our mission is to elevate African art both locally and internationally and to create finely finished pieces using traditional metallic and wooden materials and processes, with a special focus on the unique colours and patinas that are the hallmark of traditional African art.